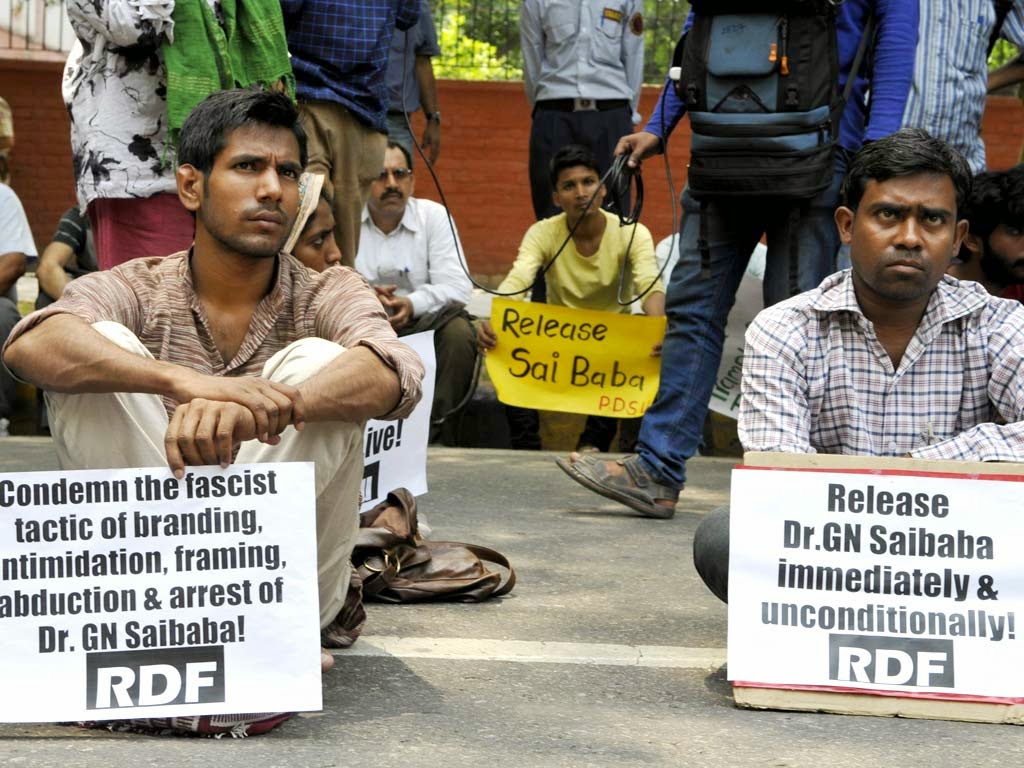 Four days after he was arrested by the Maharashtra Police for alleged links with Maoists, Delhi University teacher GN Saibaba is planning to go on a hunger strike from Thursday. Saibaba’s brother Ramdev said that he was being kept in highly unsanitary conditions.
According to a letter written to officials at the central prison, Ramdev met Saibaba in jail on May 12 where he was informed of the condition he was being kept in.
“I came to know that he was kept in solitary confinement, not allowing anyone to help him,” the letter states.

Read: Cops get 14-day custody of DU professor GN Saibaba
Ramdev has requested that Saibaba be provided with two assistants since his 90% locomotor disability restricted him from conducting even daily activities such as using the toilet.
Delhi University teachers along with representatives from various other civil society organisations on Wednesday demanded that Saibaba be released immediately.
The main issue raised by colleagues and family members was that Saibaba was allegedly not being given medication regularly.
He suffers from hypertension as well as heart ailments. He also suffers from chronic backache since his disability puts a lot of pressure on his spine.

Read: Maharashtra cops likely to oppose DU prof GN Saibaba’s bail
“The conditions that Sai has been confined in are deplorable. He is in solitary confinement when he clearly needs attendants, he is not being given his medication and he is being forced to live in indignity. This amounts to torture,” said Karen Gabriel, who teaches English at Delhi University.
Former chief justice of the Delhi High Court, Rajinder Sachar said that it seemed that the arrest was illegal.
“It is a shame that Saiwas arrested from the university premises and the university has not spoken out against it. On behalf of People’s Union for Civil Liberties, I demand that Sai be released immediately,” Sachar said. Others pointed out how several others who had raised their voice in support of tribal and land rights were earlier harassed. “It has been seen that when allegations of being Maoists are leveled on people, human rights become irrelevant. We have to look at cases against SAR Geelani, Iftikar Geelani and Binayak Sen, all of who were acquitted, to know that they were picked up for dissenting only,” said Nanadita Narain, president of the Delhi University Teachers’ Association.
Postado por Comité Galego de Apoio a Guerra Popular na India às 6:46 p. m. No hay comentarios: 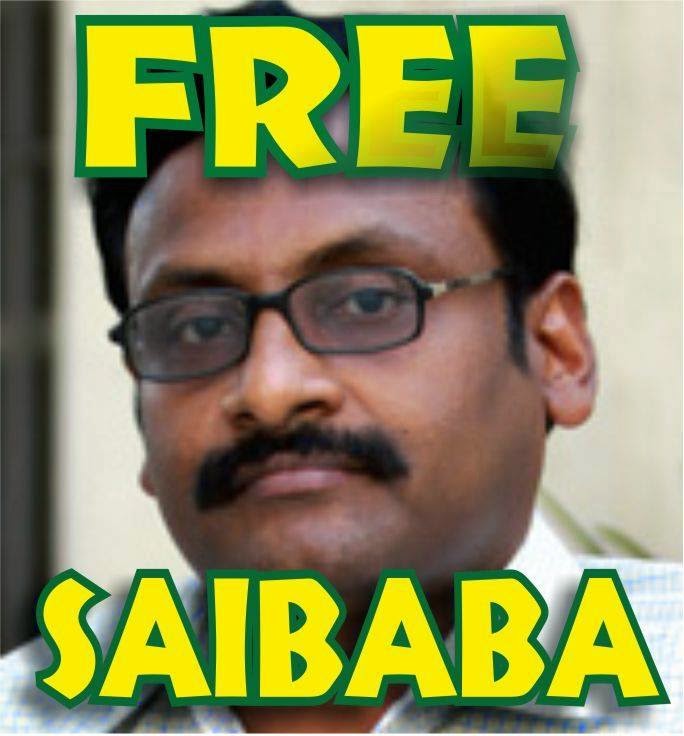 Statement from Revolutionary Democratic Front – May 9, 2014

Today, the 9 of May, plain-clothed personnel of the Maharashtra Police abducted Dr. GN Saibaba while he was returning home from Daulat Ram College in Delhi University after examination duty. Dr. Saibaba, who suffers from 90% disability and is on a wheelchair, was blindfolded and pushed into a vehicle. After this secretive arrest of Dr Saibaba from within the university premises, it is believed he is being taken to Gadchiroli in Maharashtra by flight. None of his family members were informed and after repeated efforts to contact him, the driver of his vehicle informed the family of his abduction. This stealthy and dastardly abduction of a university professor smacks of the desperation of the Maharashtra police and violates the basic human right of an upstanding, democratic voice in this country. This abduction, it is believed, to be with regards to a fabricated case filed by the Maharashtra police that subsequently conducted a raid and an interrogation at Dr. Saibaba’s residence on the 12th of September and 7th of January respectively. During both the raid and the interrogation, Dr. Saibaba and his family extended their full cooperation with the police and intelligence forces. This abduction by Maharashtra Police reflects the extent to which the police can stoop to rake up false charges in fabricated cases and implicate voices that speak up for the democratic rights of people.
President of RDF in Uttarakhand, Jeevan Chandra, was similarly picked up on 5th of May in Uttarakhand. The charges against him were that of having connections with the Maoists and calling for the boycott of the elections. RDF strongly condemns the abduction of Dr. Saibaba and the abduction and arrest of Jeevan Chandra by the police force.
RDF calls for a protest demonstration at Maharashtra Sadan


Press Release by Delhi University Teachers
Against the arbitrary arrest of Prof. G N Saibaba
Dr. G N Saibaba, Assistant Professor at Ramlal Anand College, Delhi University, was abducted by the Maharashtra police today, 9th May around 1.00 PM. He was in the Daulat Ram College for examination duty. The incident came to light when Vasantha, Prof. Saibaba’s wife, got a mysterious call around 3 p.m., informing her that her husband is being taken to Gadhchiroli by the Maharashtra police. There is otherwise no official intimation from the police about his arrest or charges against him so far. His driver and the car also were missing for several hours after that.
Vasantha, accompanied by Delhi University teachers, lodged a missing person complaint at the Maurice Nagar police station an hour later. Maurice Nagar police has now confirmed that Maharashtra Police came with a non-bailable warrant against Dr. Saibaba. Later, Dr. Saibaba managed to get hold of a cell-phone from someone at the airport and speak briefly to his daughter, before the phone was snatched away from him. He confirmed that he was inside the Delhi airport and being taken to Nagpur by the Gadchiroli police.
Dr. Saibaba has been facing harassment and intimidation since the last one year. His house was raided and his personal belongings taken away in the name of investigation. Clearly there is an attempt to frame him up. The Delhi University Teachers Association have earlier denounced these attempts by the police. Now the police have acted without any prior information and abducted Dr. Saibaba.
Prof. Saibaba suffers from 90 per cent disabilities and is strapped onto a wheelchair. To harass and intimidate him like this is a gross violation of his basic human rights.
We strongly condemn this arbitrary and illegal action by the police in connivance with the University authorities. This is an attempt to stifle voices of dissent and suppress those who have been vocal against injustice and oppression.
earlier message received from activists in Delhi
Prof. G.N. Saibaba, faculty at DU and Joint Secy of Revolutionary Democratic Front was abducted today by the Maharashtra police when he was returning from his college. Without even informing anyone, the police has already taken him to the airport to fly him to Maharashtra. There is a press conference at his residence (Gwyer Hall Hostel warden flat) today at 5.30 pm condemning this police abduction. Please join the press conference. For the last one year the police has been trying to implicate him in absolutely absurd and false charges. To prepare grounds for this, there was first the most vicious media trial against him, followed by a police raid at his residence last year and then police landing him to interrogate him early this year. Now he has been abducted in this surreptitious manner. Condemn and protest against this dastardly police act
Postado por Comité Galego de Apoio a Guerra Popular na India às 12:47 p. m. No hay comentarios: