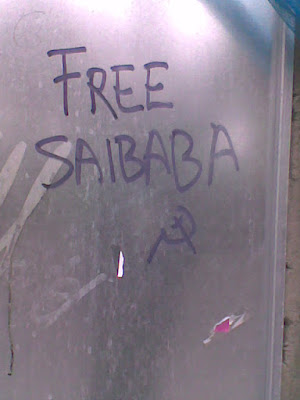 Invitation - Dear Friends and Comrades ! We cordially invite you to the Meeting in the memory of Rohit Vemula on 15 March,2016 Tuesday , 5.30pm to 9.30pm at Sundarayya Vignaana Kendram Mini hall, Baghlingam palli, Hyderabad... A book - Named "VELI VAADE TOLI PODDAI" - ( A compilation of writings by VIRASAM members ) will be released by Rohit's Mother Radhika garu ... Please share this to all our friends...

Second woman guerilla: “The Party Showed Us The Way … Like A Mother”
This is a jungle. But there are a lot of stories to tell from the lives of the inhabitants. Before the party came, there was the authority of the village heads. Their authority was also exerted on the land. Their authority was on the people’s lives. It was on the women.
The women of our community did not have any power over their lives. They did not have any say on the decisions of their marriages. Customs allowed the boys to take away the girls according to their wish and will. When the girls went to shandies (market), the boys would snatch them and even rape them. Some women were even killed.
When I was in my home I faced a lot of difficulties. I faced all what a woman in this community faces. I experienced the domination of men, the frustration of rigid customs and other such things.
The Party showed the women a way like a mother. They educated our society. They educated the people. They said that women need not face the domination of the mother, fathers, brothers and the community as a whole. They said it was part of the exploitation of society as a whole.
The Party made me a member of the baalala sanghatan, the children’s organization. When I became older, I joined the women’s organization. When I was given responsibilities in the organization, people in the village commented. They said it was not proper for a woman to be so active. They said I should not try to be so assertive.
Some went to the extent of threatening the members of my family. They told them I would later join the squad and so to marry me off. All this talk began to influence my parents. One day my younger sister informed me that my parents drank liquor to get me married. On hearing this, the members of the village women’s organization and I stayed back. We discussed the matter. Waiting for the squad to come and solve the issue would be too late.
So we took up the issue. We talked with my parents. I questioned them why I should be married at such a small age. We tried to explain them why it is not good to marry girls at such a young age. We tried to tell them how and why we should change our lives in these aspects.
This kind of a change was a process. This process turned us into human beings. It revolutionised our society and thinking. It democratized human relations in our society. It was a progressive social transformation.
This transformation applied to me too. I learnt how to think. I learnt how to fight with the old to obtain the new. I became more and more active in the women’s organization. After a few years I decided to join the squad. The Party comrades also suggested this to me.
It was inevitable. It was inevitable because of the increased consciousness. The education the Party gave me, the revolutionary practice I was in and the total revolutionary atmosphere in which I was, made me leap into the Party. I now understand that this is a leap into the class struggle. It is a leap in my personality. It is a leap of women as an oppressed section. I am one among many. This is a part of the emancipation of society as a whole.
I now know how to use a weapon. I know how to go and get things done. I know how to lead a team. I know how to teach. I know how to deal with the problems of my comrades. It was the Party that taught me all this. Without the Party I would not have learned a little bit of all this.
The Party is like a mother. It showed a path for us. It is everything for us. Now women are becoming leaders. The Party is making efforts to advance women even more. There must be more such efforts. We too must become part of these efforts. I wish the Party would start squads in areas where there is no squad until now. Only this would bring the women out of age old shackles.
I understand that there is more exploitation on the women in the outside world, in the cities. I understand that women are oppressed, whether they be in the cities or in the villages, whether they are educated or uneducated. So all women must come together. They must come together in class struggle. They must come together in revolution.
(These are the factual stories of two women guerillas, members of area committee rank in the CPI(Maoist) Party, in a platoon in Dandakaranya. The occasion was the 8th March 2005).
Posted by maoistroad
Postado por Comité Galego de Apoio a Guerra Popular na India às 6:05 p. m. No hay comentarios: